As one of the partners, but also a regional South East Europe Hub coordinator at the RRI Tools project, Center for the Promotion of Science organized the first, official RRI Tools training session in Montenegro, Kolasin, on May 30-31.

During the interactive sessions, stakeholders had a chance to learn and discuss the basics of the RRI concept, but also to get more information about the RRI Toolkit: developed tools that will help stakeholders align R&I with the needs of society.

Being one of the selected tools, recognized by the RRI Tools consortium, SATORI project was also presented to the audience – main objectives and outcomes of the project. In that respect, many SATORI reports were mentioned, especially those aimed reviewing ethical assessment in selection of EU countries and those with focus on different scientific disciplines. 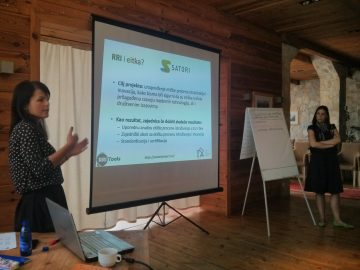